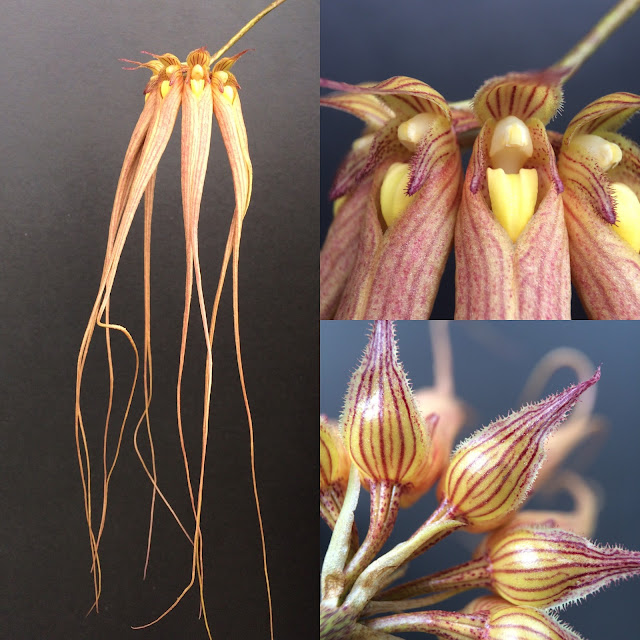 Exactly this time last year, I was gutted when the spike that this plant gave out suddenly collapsed before it was fully open (see this link under October 2014).  So this year when I saw a spike appearing, I was overjoyed.  Even more overjoyed when I notice another one appearing at the same time!

I bought two of these at the Flower Show early this year - one larger specimen and one smaller, immature one.  Unfortunately, I didn't really understand these plants very well and hung the larger one up, exposing it to cold and windy weather thinking it would like the light.  Worried that it might dry out too much, I also kept watering it... now I realise I was probably supposed to just ignore it and let it rest over the cooler period.  Sadly therefore, the roots rotted and I didn't realise for many months till I took it out to repot it!

Finding the roots were very rotten sometime in June, I decided to try a modified version of "spag and bag" method I had heard off - I suspended it in an empty plastic container with some moss and pebbles at the bottom.  The moss to keep the environment in the container humid (it's SO windy on our balcony) and the pebbles to weigh it down so it didn't get blown down with each puff of wind!

I'm glad to report that it hasn't died and there is some new growth appearing... I just removed all the old roots which were dried out as I was a bit worried they might get in the way of the new growth.  I also split the section with new growth off from the other section in the hope that it might fare better.


I was a bit worried that the new roots were drying out too much after removing the old roots though and now I have put it in a pot with bark and clay pellets but I'm also worried that that will be too damp!

"Whatever the type (of dendrobium), it is important that when the season's growth is complete, water should be withheld.  Plants that are watered while resting face the danger of losing their domant root system of suffering damage to the eyes at the base of the plant; this will in turn upset future growth as the potential flower buds along the stem will produce small plantlets, known as keikis, instead of flowers..... To prevent the keikis from growing, the plants must be kept dry in winter."

Wish I had known this early - it would have saved a number of dendrobiums I have killed!

Very surprised and excited about the new growth on the pink and white dendrobium - a new spike AND a new pseudobulb! I had originally put this in a decorative glazed clay pot after the flowers had died but heard from others that their similar dendrobiums had rotting roots so I transferred it again a few weeks ago into a plastic pot with more drainage below.

Another orchid with green flowers which I find so refreshing!  Culture information here. 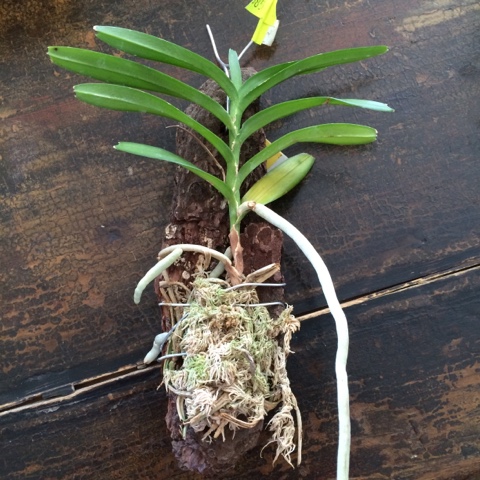 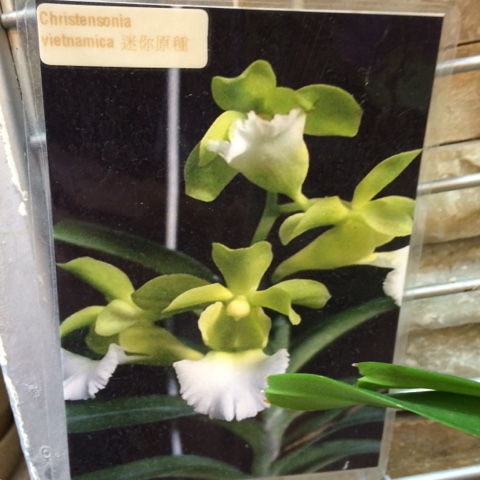 
My experiment with taking some of the other Vanda plantlets out of media seems to have done well.

Spending nearly a month away was a great break from the summer heat here but sadly I returned for find quite a number of my orchids had not survived.

Couldn't resist getting this because of the unusual yellow and purple combination - the common version being the white and purple/pink... 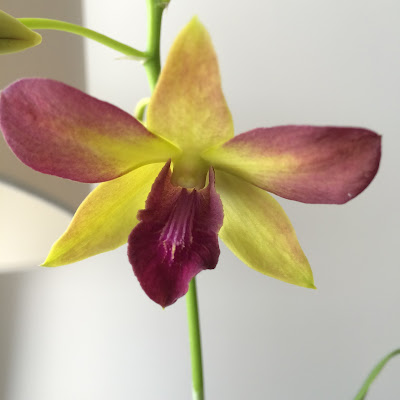 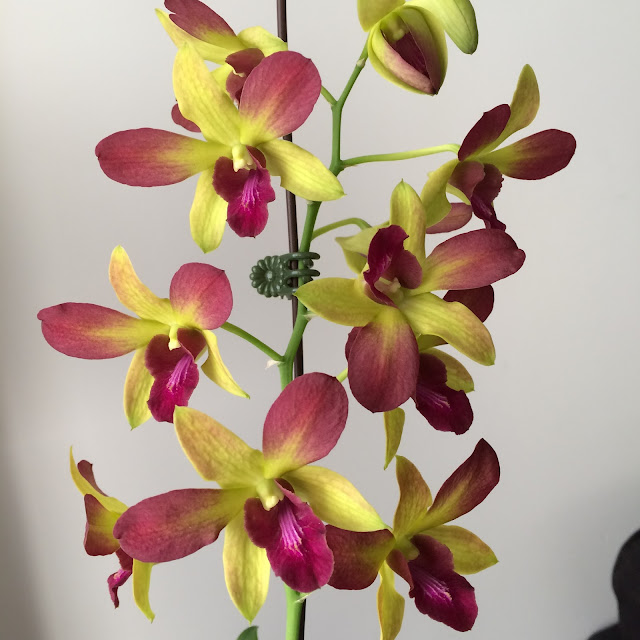